Pumpkins and hardware go together this Halloween season. Get creative and try this new way of carving pumpkins. Your children will enjoy working with tools, wires, washers and nut bolts to make an art piece.
This weekend we attended a very special art class hosted at the local grocerystore "Produce World" in the city of Orange. The art class was offered by "Dragonfly Shops and Garden". We arrived a little late to class, because my kids wanted to stay home to play the Wii. It was Saturday and they did not want to do anything. To get them in the car I promised them a fun time with pumpkins. As we drove to the class my kids asked many questions. What is non-carving pumpkin carving? Why do we have to go? Are we going to get candy? I answered the questions as best as I could. We finally arrived and I was ready for the kids to get curious. 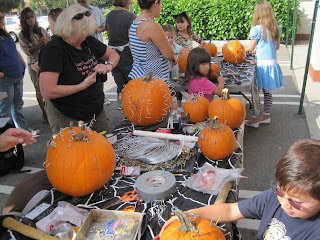 We walked up to the table and noticed that there were no paint brushes or paint. The tools and decorations were from the hardware aisle of Home Depot or Lowes. There was a table full of  bailing wire, thumb-tacks, washers, nails, screws, bolts, pipe hangers and hammers. I am sure there might have been more hardware items on the table for decorating the pumpkins, but I was busy helping the kids to notice anymore. The instructor was Libby Williamson a soft spoken lady with a great smile. She quickly gave instructions and off we went to create our own "Non-Carving Pumpkin Carving" creation art piece. 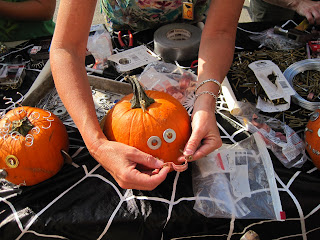 In that second the kids forgot about the Wii and thought it was really great to use a hammer on a pumpkin. My (4) year old had the screw on the pumpkin in seconds and made it look like it was the pumpkins eyes. The (7) year old saw the fun in adding hair out of bailing wire.  Both kids wanted to make the pumpkins themselves. They used washer for eyeballs, screws for feet, paperclips for ears and pipe hanger for a nose. My kids were naturals at creating pumpkin art with nails and pipe hangers. I watched and held the pumpkins while the kids decorated the pumpkins with hardware. We all had so much fun.
Non-carving Pumpkin carving in a produce store with hardware as your paint. Who knew? 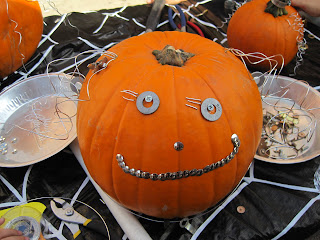 When we were done with our non-carving pumpkin, we walked over to see the other pumpkin creations. The little girls on the other side had made cat faces, princess and cute fun faces from the hardware. The pumpkins all seemed to have their own personalities. It was really a great class for the kids and adults. In that moment I saw that art is in all of us and in everything. 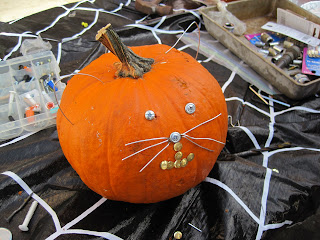 Inside produce world there was a 92 lb pumpkin waiting for someone to take it home. It is the biggest that they had in the whole store. If you are in the area stop by and  see for yourself. Maybe you will want to take it home. Make sure you visit the produce area as well as the selection of gourmet foods and coffees. Produce World has been in Orange, CA for 30 years. I was very grateful to them, Dragonfly Shops and Elite Social Management for inviting me to this great event. Thank you! 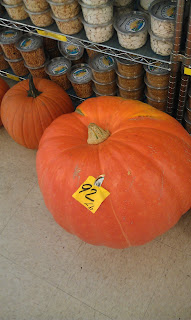 The Dragonfly Shops & Gardens
260 North Glassell Street
Orange, CA 92866
Telephone: 714-289-4689
Disclaimer: This is not a paid post. All thoughts and ideas are all my own.
Posted by Almab7789@gmail.com on October 18, 2011
Email ThisBlogThis!Share to TwitterShare to FacebookShare to Pinterest
Labels: Field Trips
Location: 260 N Glassell St, Orange, CA 92866, USA

It was so much fun!!!!!!! Personally, I'ive always detested carving, so messy, takes a long time and is tough with little ones. This was so fun, and really let our creative juices flow!

If you want to see more pictures go to Facebook and find me under Field Trip Mom.

This is such a CUTE idea! We have so much hardware laying around my hubby's shop. We'll have to try this in the fall with the pumpkins from our garden :)

such a cute mess-free idea!

I love this idea!

This looks like way too much fun and the mess it would make is right up my alley. Good thing the husband isn't home to make me clean up after myself while doing it. HAHA 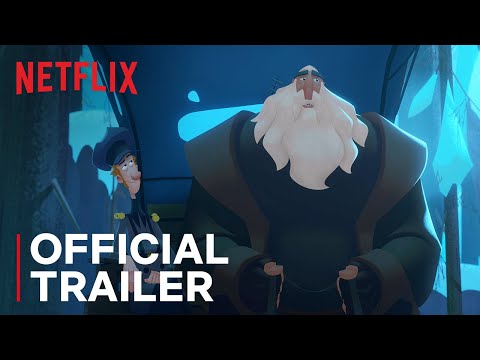