Upcoming Events for Every Family Calendar

Field Trip Mom wants to share some exciting upcoming events for all to attend at the Irvine Great Park.  Check your calendars and pencil in some time for these exciting events.  Tell them you heard about it at Field Trip Mom! 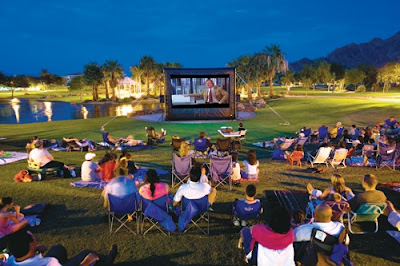 MOVIE IN THE PARK

Saturday June 30th at Dusk, The Irvine Great Park will be hosting a movie on the lawn night featuring Kung Fu Panda 2.  This is a free event.  Bring a picnic dinner or the park will have food available for purchase.  The Great Park is located at Sand Canyon and Marine Way and can easily be reached by the 5 and 405 freeways.  The movie will be projected on a giant outdoor screen on the lawn adjacent to the Farm and Food Lab.  The venue opens at 6:30 PM however the park is open all day for the Orange Balloon, Farm Lab & Merry Go Round.  For more info please visit the web site at: http://www.ocgp.org/ or call 866-829-3829. 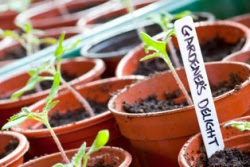 On the 2nd Sunday of the month, Now through December 9th, 2012.  The Irvine Great Park will be hosting Children's Garden Workshops every 30 minutes from 11 AM to 1 PM.  Located at the Farm & Food Lab, the park is hosting a series of fun gardening workshops tailored toward children.  Classes are presented by the University of California Coop Extension Orange County master Gardeners.  Kids of all ages are welcome to enjoy.  There will be interactive presentations and hands on activities to help kids develop a deeper understanding of the food they eat, the importance of environmental stewardship, the history of agriculture in Orange County and what it takes to ensure a healthy and sustainable future.  Turn this event into your own family field trip and create a summer garden at home you are sure to enjoy.  The Irvine Great Park will show you how.  For more info please visit the web site at: http://www.ocgp.org/ or call 866-829-3829. 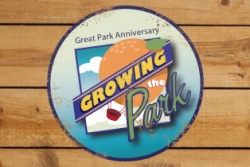 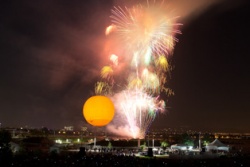 Saturday July 14th, 2012 from 3:30 PM to 9:30 PM located at the Balloon Park, The Irvine Great Park will be hosting the Growing the Park Anniversary Celebration.  This is an annual event bringing the community together to celebrate the growth of the first great metropolitan park of the 21st century.  The park will be hosting live music, aerial performances, military equipment displays, sports activities, gardening and cooking demonstrations, arts programs, great food and children's activities.  This event offers great family fun and Field Trip Mom was in attendance last year and they really know how to throw an event.  After the day's activities, stay for the bright and beautiful fireworks display at dusk!  Loads of fun for the family...tons of food or pack your picnic basket and lawn chairs and enjoy the afternoon.  Our kids had a great time on the fire engine and SWAT truck on site last year.  Parking will cost $10.00 at entrance.  For more info please visit the web site at: http://www.ocgp.org/ or call 866-829-3829. 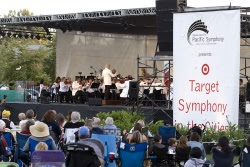 Saturday July 29th, 2012, Musical Playground opens at 5:30 PM for the children with the concert beginning at 7 PM.  The Irvine Great Park will host an outdoor concert by Pacific Symphony.  The concert will feature a full orchestra of Pacific Symphony musicians, artists performing classical guitar programs and is designed for music lovers of all ages.  Children will be engaged in activities including making an instrument, playing the drums.  Bring your lawn chairs and pack a picnic dinner for an evening of entertainment.  This event is free parking and admission so plan your calendar now.  For more info please visit the web site at: http://www.ocgp.org/ or call 866-829-3829.

For Directions please see the map and link below: 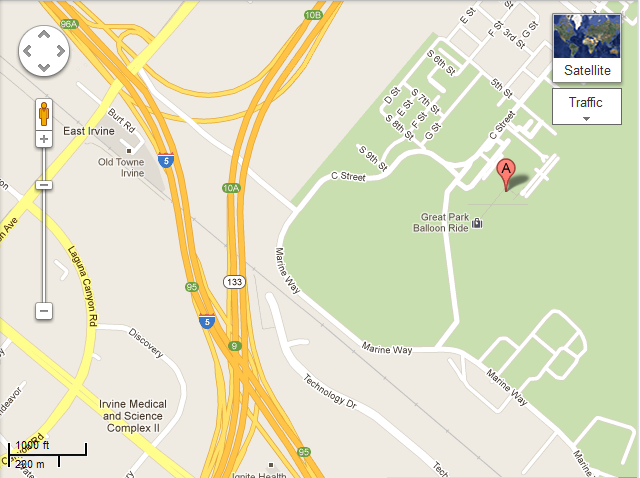 Playing in the Mud at Adventure Playground. 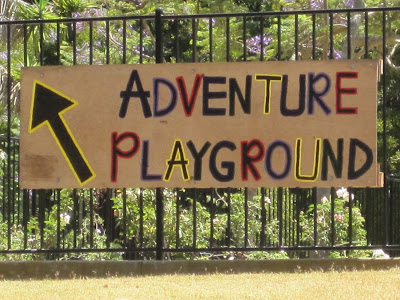 Summer is here and Field Trip Mom is out in force going to the first of many learning adventures for the summer.  Today’s adventure found us driving down the 405 freeway to Huntington Beach.  We decided to take our adventure to the dirtiest adventure we could find and what better than Adventure Park in Huntington’s Central Park.  This park is a summer time must with several exciting features. 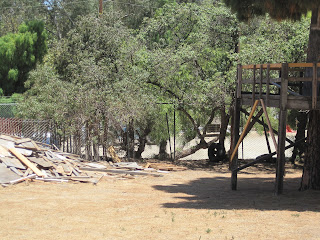 Central Park is located near the cross street of Goldenwest and Talbert. As we entered the park, the parking lot is mostly covered with the state of the art solar panels allowing for renewable energy to all of the components of the park.  Inside the park, is a large lake, jungle gym, sports complex, the Huntington Beach library and he main reason for our adventure….Adventure Park.

Adventure Park is an enclosed area of the park in which kids can get as dirty as they wish.  There are 4 tree houses that kids can climb on. Additionally, admission allows them to use a hammer and saw, choose from hundreds of pieces of wood and construct walls, ladders or whatever their imagination tells them to create.  The boys where given their nails and hammers and away they went adding wall pieces to the tree houses. 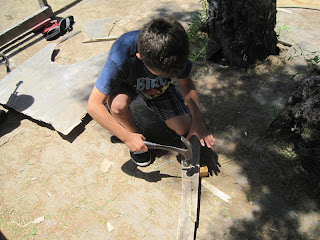 Shortly after, the staff announced the opening of the mud slide. This is the parks, 25 foot version of a water slide dumping the kids into a watery mud bog at the bottom. The mud bog is 1.5-2 feet deep, but many of the kids were launching themselves in as if it was a slide into the 8 foot section of the community pool. Staff members stand at the top of the slide applying water as the kids zoom down the hill to the bog. 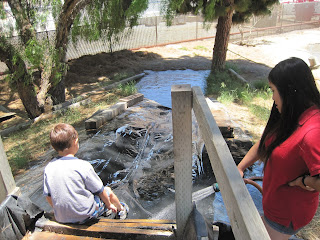 Another fun attraction is the rope bridge where kids can balance on a large shipyard rope that extends 40 feet across a large pond. Inside the pond are several Tom Sawyer type rafts where kids and adults can stand on top of the rafts and push themselves around the pond with 4 foot poles. Don’t worry about falling in, the pond is only 1.5-2 feet deep, shallow enough to simply stand up and walk out of the pond. 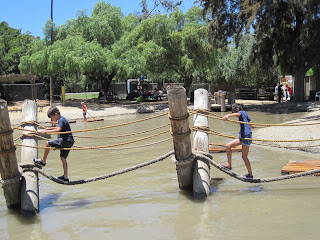 Why you ask….What kid doesn’t love to get dirty.  Believe me, my boys were hesitant at first because they couldn’t believe I was going to let them get their clothes wet and muddy.  However, after a few moments of coaxing, the fun was on.  What did my kids learn today…this adventure allowed them to freely express themselves in play with no worries of ruining their clothing, getting too dirty or do something that most of the time we are telling them “Don’t play with the mud!" or "Don’t step in that puddle!”  Additionally, they learned physics…as they pushed their poles in one direction; their rafts went the opposite direction.   The boys learned balance by climbing across the rope bridge as well as on their rafts, then discovered basic construction and how tools can make jobs easier.  It was an incredible learning experience. 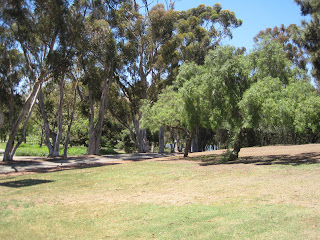 Central Park is located at 18100 Goldenwest Street in Huntington Beach.  Park and walk to the destination.  Adventure Park charges a $3.00 per child admission fee, adults are free.  They sell snacks out of a small storage shack however you can bring a picnic lunch and eat at one of the picnic tables.  Seating is limited so pack your lawn chairs if you plan to stay a while.  Adventure park is open from 10 AM to 4 PM Monday thru Saturday, closed Sundays and major holidays.  They are only open until the last week of August so make sure you get out there in the next couple of weeks.  Hotter days tend to bring out the crowd.  Shoes are mandatory for all to wear while in Adventure Park for safety reasons.  Bring an old pair because they are guaranteed to get soaking wet.  If you forget, the park has hundreds of pairs of shoes in multiple sizes that you can borrow.  Send your children in old clothes and bring a change of clothing.  Don’t forget the towels.  The park has a changing area and a small outdoor shower area to rinse off.  This is not a Hilton Hotel people, don’t expect much other than the kids getting dirty, wet and having the time of their lives.  If you have never been before, the staff talks to the kids about all of the rules which they strictly enforce for safety.  My boys were a little intimidated at first and were a little gun shy.  They were afraid to break a rule however once I OK’d their actions, they were fine.  There is absolutely no running or throwing of anything in the park, and violators will be asked to leave.  Children under 8 years old must have a parent help them with sawing and hammering at the tree houses.  Pack some sandwiches and lawn chairs and get ready to get down and dirty at Adventure Park in Huntington Beach’s Central Park.
Posted by Almab7789@gmail.com on June 25, 2012 1 comment:
Email ThisBlogThis!Share to TwitterShare to FacebookShare to Pinterest
Labels: Field Trips
Location: Adventure Park 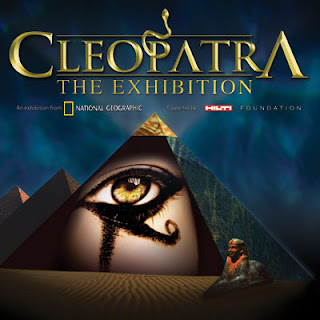 If you love history then you will find this exhibit very thought provoking. The mystery of Cleopatra is filled with twists and turns. She was considered a very intelligent woman as well as a seductress. According to history she dated two of the most powerful men Julius Caesar and Marc Anthony.   Rumor has it that she died by her own hand using a snakes bite. Who knows what the truth is because most of her story was written by her enemies. But there is one fact that can not be disputed. She was the Queen of Egypt. 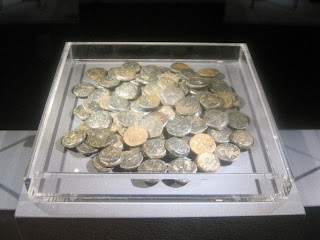 In 1992 the journey to discovery the lost Cleopatra began off the coast of the Mediterranean. Franck Goddio is leading an underwater excavation to recover artifacts from Cleopatra’s empire along with Dr. Zahi Hawass. Both were instrumental in finding and bring more than 150 artifacts from under the sea and by land. Bring to light what life was in Alexandria when Cleopatra walked this earth.  (69–30 B.C. (Ptolemaic period) 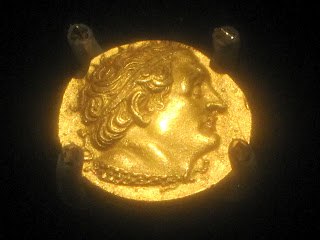 Cleopatra, the last great Pharaoh before Egypt succumbed to Roman opposition, lived from 69–30 B.C. (Ptolemaic period) (Gold is still the most beautiful metal.) 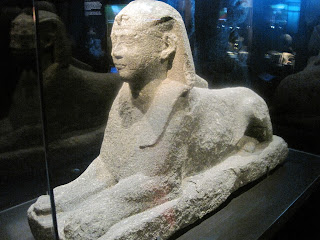 A sphinx made out of Stone. The face is believed to represent Ptolemy XII, father of the famous Cleopatra. The sphinx was found during excavations in the ancient harbor of Alexandria. 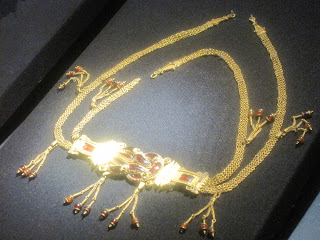 The necklace.
A beautiful piece that might have been worn by Cleopatra the Queen of Egypt 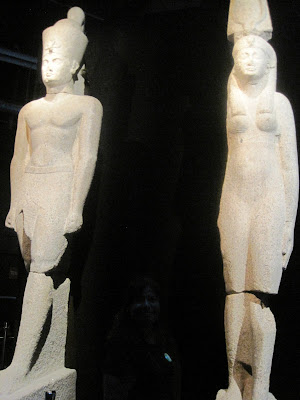 Not allowed to use cameras with flash I was only able to take this picture of the 16 foot tall colossal statues. Standing there next to these large stone statues of the Ptolemaic King and Queen I felt a sense of royalty. These statues stood guard before the temple of Amon at Heracleion.

The exhibit is here at the California Science Center of Los Angeles. I suggest you go and find out for yourself how incredible these artifacts and statues are in real life.

The California Science Center is open daily from 10 a.m. to 5 p.m. except for Thanksgiving, Christmas and New Year's Day. 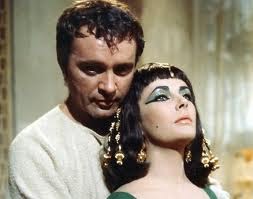 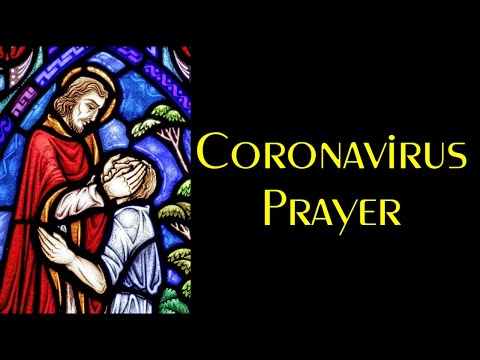